Harry Kane moved level with Jimmy Greaves as Tottenham’s all-time leading scorer as his 266th goal for the club clinched a 1-0 victory over Fulham at Craven Cottage.

Kane equalled the record in brilliant style, spinning away from Tim Ream on the edge of the Fulham box and firing an unstoppable effort into the corner just before half-time.

Fulham had started well, knowing a victory would send them into fifth place, above their out-of-form opponents, but they failed to capitalise on their early dominance and Spurs seized control.

Kane had a golden opportunity to score a second and surpass Greaves’ record when his close-range header was saved by Bernd Leno, but a solitary goal proved sufficient after a drab second half as Spurs claimed only their second win in six Premier League games and closed the gap to fourth-placed Manchester United to three points. 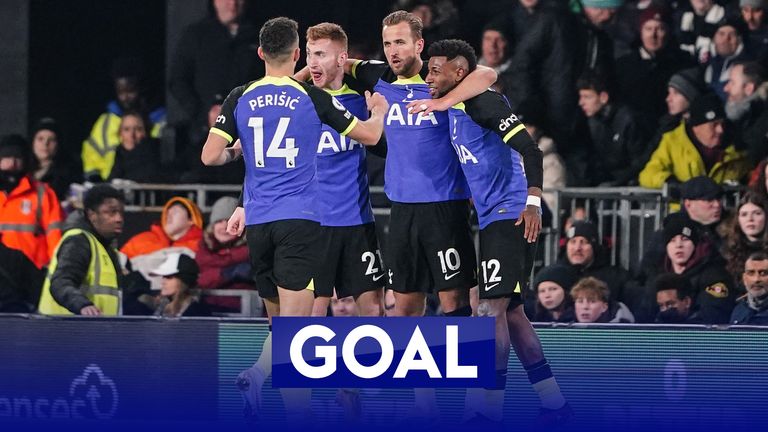 Harry Kane equals Jimmy Greaves’ Tottenham goalscoring record, notching his 266th goal for the club to put his side ahead against Fulham


Fulham, meanwhile, remain seventh, the defeat compounded by the sight of Aleksandar Mitrovic having to be helped off the pitch after suffering an injury following a challenge with Eric Dier late on.

Player of the match: Harry Kane

Following an 18-minute delay to kick-off due to transport issues for supporters travelling to the ground, the first half was played at a frantic pace, with Fulham initially dominating.

Spurs were largely pinned back in their own half at first, only threatening when Ben Davies fired over from Pierre-Emile Hojbjerg’s low cross, but soon they began to play their way into the game, with Emerson Royal drawing a parry from Leno.

Heung-Min Son was perhaps fortunate to avoid a red card when his studs landed on Tete’s ankle following a late challenge, but he would play a key role in the goal not long afterwards.

Receiving Hojbjerg’s pass in space, the South Korean turned and fed Kane, who swivelled away from Ream and arrowed a clinical finish into the far corner for his record-equalling 266th Spurs goal and 199th in the Premier League.

Kane had shown flashes of his threat before that, firing another stinging long-range effort narrowly over, and he should have had a second soon after the break but he sent his header too close to Leno, who reacted well, following a Spurs corner.

Spurs had surrendered a lead in their last game, the 4-2 loss to Manchester City, but a repeat rarely looked like a possibility as they defended resolutely and kept the hosts at bay in an uneventful second half. 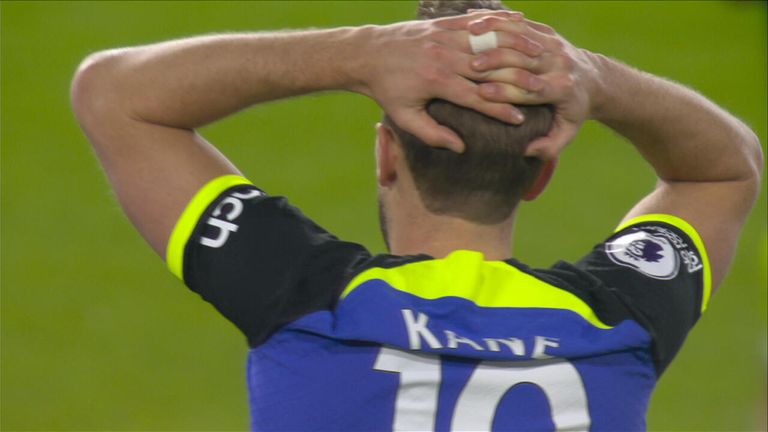 Kane missed a golden chance to score a second goal


Mitrovic threatened on a couple of occasions, firing a diagonal effort wide and sending a looping header over the bar, while substitute Manor Solomon produced a curling effort which Lloris pushed around the post.

But, despite six minutes of stoppage time in which Fulham continued to push for a leveller, Spurs held out, claiming a victory which boosts their top-four prospects after back-to-back losses against Arsenal and City.

Fulham turn their attention to the FA Cup next weekend, as the Cottagers host Championship side Sunderland on Saturday, kick-off 3pm.

The west Londoners return to Premier League action the following Friday, with a west London derby away at Chelsea, live on Sky Sports.

The Cottagers take on Nottingham Forest and travel to Brighton before they end their February schedule at home to Wolves on February 24, live on Sky Sports, kick-off 8pm.

Tottenham also have an FA Cup fourth-round match at the weekend, as they go to Championship side Preston on Saturday, kick-off 6pm.

Spurs return to Premier League action with a Super Sunday clash at home to Manchester City, live on Sky Sports. Antonio Conte’s side then face two tricky away trips to Leicester and AC Milan later in February, before hosting two London derbies against West Ham and Chelsea, both live on Sky Sports Super Sunday.